Click on the cover to pre-order your copy today!  This book will be limited to the number of preorders purchased until 9/14/22. 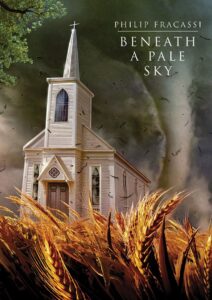 BENEATH A PALE SKY
by Philip Fracassi

Beneath a Pale Sky collects eight stories of horror, including two original novelettes, that will take you from the high-security ward of a mental hospital to the top of a Ferris Wheel on an ocean pier. These stories will bury you in the rubble of an earthquake, pull back the veil on a soul’s journey into the afterlife, and turn a small midwestern town into the secret domain of cross-dimensional gods. Combining old-school horror with the modern weird, Philip Fracassi will take you places you’ve never been before, and show you sights you won’t soon forget

Philip Fracassi is an award-winning author and screenwriter. He is the author of the story collections Behold the Void, named “Collection of the Year” from This Is Horror, and Beneath a Pale Sky, named “Collection of the Year” by Rue Morgue Magazine, and a finalist for the Bram Stoker award. His novels include A Child Alone with Strangers, Gothic, and Boys in the Valley.

Philip’s work has been translated into multiple languages, and his stories have been published in numerous magazines and anthologies, including Best Horror of the Year, Nightmare Magazine, Interzone, and Black Static.

For more information, you can find Philip on social media, or visit his website at www.pfracassi.com

New Kevin Lucia novel up for pre-order! The Horror at Pleasant Brook 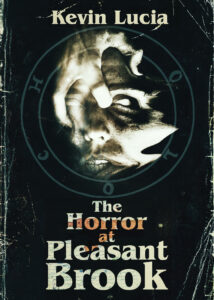 THE HORROR AT PLEASANT BROOK
by Kevin Lucia

This Halloween, a malevolent, creeping horror invades a small, isolated town nestled deep in the Adirondacks. It cares nothing for this town’s secrets, prejudices, or flaws. Its only desires are to consume everything in its path and spread, until nothing else remains.

It is ancient, pitiless, and unstoppable. It is the horror at Pleasant Brook.

LAST NIGHT AT THE BLUE ALICE
by Mehitobel Wilson

This edition is limited to just 45 signed copies and includes a new novelette set in the Blue Alice world along with a new introduction by Lucy Taylor.

Click on the image below to order your copy! 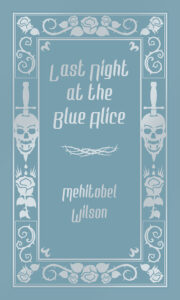 Mollie Chandler is on the verge of joining a shadowy Order whose magical operatives, the Glymjacks, manipulate events of the past. As the only candidate for the role of Psychopomp, she must pass one final test before the job is hers.

The crumbling Blue Alice has been gathering ghosts for over a hundred years. Once a grand mansion, it was converted to a rooming house in the 1920s. Tenants throughout the century since have suffered violent poltergeist attacks by a vengeful spirit, complained of a spectral woman in black who looms and leers at their every move, reported hearing music when there should be none playing, and appealed to exorcists when tormented by a judgmental demon.

Mollie must use magic, ingenuity, and intuition to travel back in time to the source of each haunting, avert their circumstances, and change history.

If she succeeds, she will have to give up everything she’s ever known to become a Glymjack.

If she fails, Mollie will not survive—if she’s lucky. The alternatives to death are far worse.

Mollie has but one night to change the histories of the dead and plot the course for her own future.

She is running out of time, and into the haunted heart of the Blue Alice.

“Mehitobel Wilson (no relation) doesn’t write nearly enough, so something new from her is a cause for celebration. LAST NIGHT AT THE BLUE ALICE reveals a writer in full control of her considerable talents. The unique premise lifts it far above other tales of hauntings as each character comes alive on the page and pulls you in. Do not miss this.”

-F. Paul Wilson, Author of The Keep, The Tomb, and the Repairman Jack series (the Adversary Cycle.)

“Think of Bel Wilson as a Ralph Ellison or a J.D. Salinger of Horror. She takes a long time to write a story but the result is always worth the wait. The result is always groundbreaking. She manipulates prose the way Munch, Bosch, and Goya manipulated brush strokes. With mere words she chisels art out of darkness, and these exceptional skills couldn’t be better exemplified than in LAST NIGHT AT THE BLUE ALICE, likely the most intriguing and original horror-fantasy book I’ve ever read.”

–Edward Lee, author of The Dunwich Romance, Header, and The Bighead

“Like the best of Harlan Ellison, her fiction walks in enraged, full of fearsome intelligence and balls out to here.”

-John Skipp, author of The Art of Horrible People and many more.

The death of Ruth Parker reunites her daughters, three women scarred by a childhood of nightmares and mysterious secrets. Now they must choose a less violent path—or embrace their mother’s terrifying legacy.

“A horrific and disturbing tale, one of creeping dread…the best novella I read in 2016, the one that cut the deepest.” – Peter Tennant, Black Static #56

“Muscadines is an essential read for anyone who considers themselves a connoisseur of atmospheric, insightful, powerful literary writing.” – Paul Michaels, This Is Horror

“Nobody does very bad women like Miskowski, and this deeply disturbing story further establishes her as a master at exploring the psychological terrain of the kind of women who aren’t supposed to exist.” – Lynda E. Rucker, author of You’ll Know When You Get There

“Alternating between memory and confrontation, the narrative lays bare the secrets and sins that have bent and warped the lives of the three Parker sisters. Their efforts to reconcile themselves to their dark inheritance, the lengths to which they must go to reckon with their mother’s legacy, lead to a stark, powerful climax. Its prose equally fearless and graceful, Muscadines offers ample evidence why S.P. Miskowski has emerged as one of those writers who must be read.” – John Langan, author of The Fisherman

“S.P. Miskowski’s Muscadines is a glorious, heady rush of red clay dusted prose. Here she unpacks for us something lovely; something with lips and teeth stained crimson. With prose that dances between poetic and razor sharp simplicity, Miskowski has created a story that will linger in the darkest rooms where you store your secrets.” – Kristi DeMeester, author of Such a Pretty Smile

“S.P. Miskowski has real star power. Muscadines is a fine example of her Neo-Gothic chops.” – Laird Barron, author of The Croning and The Beautiful Thing That Awaits Us All

Down to the last 24 hours or so to order this and match numbers to book 1.  Just click on the image below! 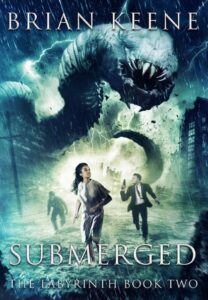 The Seven have won the first battle against the Thirteen, but it cost them one of their number. Now Frankie, Teddy, LeHorn, Tony, Bloom, and the Exit find themselves in the middle of a global superstorm on a flooded Earth, reunited with old friends and facing off against familiar threats, including the terrifying titanic might of Behemoth and Leviathan, and the machinations of Ob, Lord of the Siqqusim. In a fight that spans from a sodden landscape to the very heart of ancient R’lyeh, only one thing is certain. Even if they win, it will be at an unimaginable cost. The storm is here… and the end continues.

SUBMERGED: THE LABYRINTH Book Two continues Brian Keene’s magnum opus, featuring characters, locations, and situations from throughout his vast literary universe in a multi-volume epic saga that will thrill both new readers and long-time fans.

Note:  This pre-order is going to run from Sunday, July 3rd, 2022 until Monday, July 18th, 2022.  This purpose of this pre-order is to give those who bought The Seven (Labyrinth Book 1) a chance to get there order set up with matching numbers.  Like book 1, Submerged will be limited to 248 copies.

If you bought book 1 from me, I have a list of names and numbers so you do not have to email me your number separately  (if there are any issues, I will reach out to you).

If you have not bought book 1 yet (sold out via Thunderstorm, but may be still some copies available from booksellers), I ask that you refrain from ordering this book directly from me at this time.  Unspoken for copies will be available at a later time.  The book should be released in September.