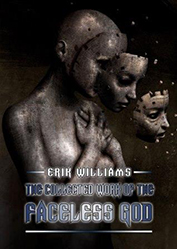 The Collected Work of the Faceless God
by Erik Williams

THE COLLECTED WORK OF THE FACELESS GOD
He had gone by many names. Asmodeus. The Faceless Nomad. The Ageless Wanderer. He has been called a fallen angel. A demon. And for many, a god. A god that is not only worshiped but offered sacrifice. Where he journeys, death follows. Yet eventually the wheel stops turning and the Faceless God finds himself stuck in a rural county in the panhandle of Florida, of all places.

BLOOD SPRING
Henry just wants his garage back. Well, he wants his wife back, too. He lost both six months ago when Claire helped an injured deer on the side of the road. In went the deer and out went the BMW. Their marriage went on hold to save what some would consider a damn good meal. But the day has come to return everything back to normal. The deer is healthy and Henry and Claire spend a quiet spring morning releasing it in the woods. Serenity soon turns to terror as they realize they are lost in the labyrinth of the forest with no food and hardly any water. Food and water are the least of their worries. In these woods a long forgotten god is worshiped. Its followers believe in sacrifice, and Henry and Claire have stumbled into their dark world.

THE FACELESS MAN AT JACKSON FARM
Sheriff Nate Lewis discovered true evil in Blackwater Forest when he found the pagan camp and severed heads and the statue of the Faceless God they sacrificed to. Little did he know that his family had encountered the same deity during the Great Depression when a mysterious carnival showed up in Cainswell. A carnival interested in providing different forms of amusements. And its leader just happened to not have a face…

FACELESS
Over a year has passed since the events in Blackwater Forest. Events that exposed the darkness hiding in Cainswell. Sheriff Nate Lewis hoped the tragedy was behind him. Chalk it up to a bunch of crazies killers living in the woods and move on. But things happen for a reason and soon, Nate finds himself dealing once again with the Faceless God. Only this time, it’s not a statue or lunatic worshipers. It might be the real deal itself, hiding in body of a college kid. A body it may be slowly taking over. But Nate has no proof. Only his gut instincts. How long can he wait to pull the trigger? And what can he fight a demon with if bullets won’t kill it?