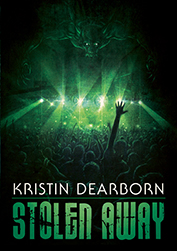 Stolen Away
by Kristin Dearborn

Trisha doesn’t have much going for her, but she is a good mother. That’s what she’s always told herself, anyway. She wakes in the middle of the night to hear her infant son has been taken. Her daughter, who saw the kidnapping, tearfully tells her a monster took him. Her ex-boyfriend Joel owes the Russian Mafia a million dollars, but that’s nothing compared to the trouble Trisha’s got herself into. Searching for her son, Trisha and Joel won’t let gangsters, demons, or Joel’s overbearing mother stop them.

Trisha and Joel are forced to confront demons along the way, and not all of them are the literal kind. Not everyone can be trusted, and that has nothing to do with who’s a demon and who’s human. Trisha knows her son is out there, and is alive. Will she be able to reunite her family?