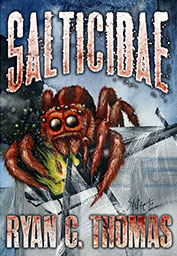 When the Beaudette mining company blows open a mountain deep in the Congo, they release something that puts man on the bottom of the food chain. Salticids, more commonly known as jumping spiders, mutated and enlarged to the size of cars through millennia of underground chemical anomalies. With eight massive legs, eyes that can see 360 degrees, and the ability to leap thousands of feet at once, there is no escaping these dangerous hunters as they emerge to feed for the first time in centuries.

Which is a very bad thing for Janet Beaudette and her mining crew, now forced to escape into the mountain itself, all the while chased by these nightmares. Thankfully she is not alone. Two American journalists, and a pygmy boy and his father, are also on the mountain, suddenly fighting for sanctuary from the massive arachnids. But perhaps even more dangerous is the Snake Man, warlord and leader of the Lost Boys. When this murdering, kidnapping, raping, black magic-practicing leader of the local militia hears that the Beaudette Mining Company is excavating mountains without his permission, he decides it’s time to teach Janet and her people a lesson in local politics.

The Black Voltage edition is limited to 75 signed, individually numbered copies. The book is produced on an oversized 7×10” trim, with bonded leather boards, spine art, specialty endsheets; and the signature page is full color; Also included is a 10,000 word new bonus novelette.