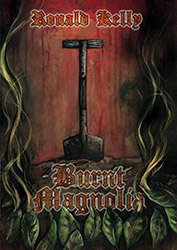 As a young girl, Laura Locke ignored the warnings of local superstition and played among the burnt-out ruins of Magnolia; a Tennessee plantation that had been forcibly occupied by the Union Army and then laid to waste during the bloody Battle of Franklin in 1864. She had always thought the ghost stories and tall tales to be untrue… until the night when she witnessed it for herself. High among the blackened columns of the old mansion, upon a balcony with no floor, stood the forlorn specter of Jessica Heller. Rather than fright or horror, Laura had felt empathy for the lost soul, along with a strange kinship. She told herself, then and there, that she would someday own the old house and discover the truth concerning the violent scourge of Magnolia and what had truly become of its lonesome mistress, who had mysteriously vanished without a trace.

Years later, as a bestselling author of steamy romance novels, Laura’s dream of owning the deserted plantation became a reality. After much construction and remodeling, the old mansion was every bit as majestic as it had been during the prosperous years of the Old South before the devastation of the Civil War. She thought life for her and her husband, Rick, would be peaceful and idyllic. But then strange and disturbing occurrences began to take place. A weeping woman in the garden. A haggard man digging feverishly by the light of a coal oil lantern. The horrifying shadow of a man hanging from the limb of an ancient oak tree. And, worst of all, a malevolent and destructive poltergeist that seemed particularly resentful of her husband’s presence.

When a world-renowned ghost hunter, a man in search of his ancestral heritage, and two local historians arrive at Magnolia, Laura hopes that the terror that stalks Magnolia will finally be put to rest. Instead, things begin to spiral out of control, leading toward a violent and bloody confrontation that somehow mirrors the deadly events that took place there over a century before.

NOTE:  the free hardcover chapbook that will go out to those who ordered all 8 books of the Ronald Kelly Essentials directly from Thunderstorm is currently in production and will ship separately in the September/October timeframe.