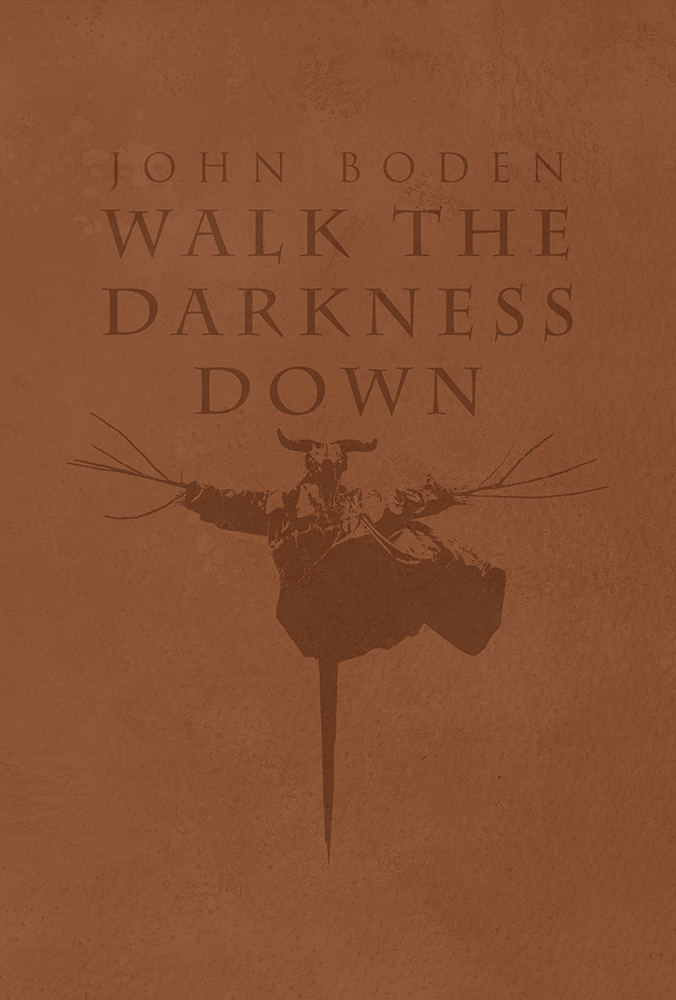 Walk The Darkness Down
by John Boden

Somethings are older than time. Older than darkness.
-Levi is a monsterous man–made of scars and scary as hell, he’s glutted on ghosts and evolving to carry
out the dark wishes of the ancient whispers in his head. He’s building a door and what’s on the other
side is terrifying.
-Jones spent a lot of time living bottle to bottle and trying to erase things. Now he’s looking for the man
who killed his mother and maybe a little bit of looking or himself as well.
-Keaton is on the run from accusations as well as himself, he suffers alone until he meets Jubal, an
orphaned boy with his little sisters in a sling.
-Every line is not a straight line and everything must converge. A parable writ in dust and blood on
warped barn wood. A journey in the classic sense, populated with dried husks of towns…and people
both odd and anything but ordinary.
Hornets, reverse-werewolves and one of the most vicious villains you’ll ever know are all part of it.
Pull on your boots and saddle up, we’ll Walk The Darkness Down.

“With Walk The Darkness Down, Boden turns his potent blend of lyrical yet-hard bitten prose loose on
the legendary landscape of the Old West. By turns poignant, terrifying and mythic, the story is infused
with a melancholic, blue collar fatalism and shot through with jet-black lines of violence and nihilism.
And yet, there is hope here as well as love–tiny points of light that seek to defy the dark and cold. It’s an
accomplished, powerful and moving piece of work and should cement Boden’s deserved reputation as a
storyteller of considerable talent–and one with a voice to kill for.”  –Kit Power, Author
of GodBomb! and A Warning