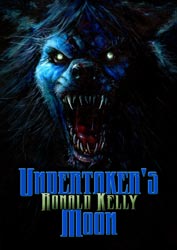 A graveyard feast beneath the summer moon …

The rural town of Old Hickory. Tennessee was a quiet, picturesque community … until the O’Sheas came to town.

Becoming the new proprietors of the town’s only funeral parlor, with the help of their charming patriarch, Square McManus, the Irish family was wholeheartedly accepted by the local townfolk. The thing began to happen. Strange things … horrible, unspeakable things … in the dead of night.

The sighting of wolfish beasts congregating around an open grave in the town cemetery. Frightening changes in several of Old Hickory’s less desirable residents. And the brutal murder and devourment of a varsity football player in the wooded wilderness outside of town. Soon, what was once concealed in shadow and secrecy was now starkly revealed, in all its ravenous fury, by the silvery light of the full moon.

As the residents of Old Hickory, as well as the local police, begin to fall victim to an unknown evil, four individuals—the town nerd, a high school jock, a widowed gunsith, and a mysterious transient from a distant shore—find themselves facing what could possibly be a hellish lycanthrope from ancient Ireland … the legendary Arget Bethir … the Silver Beast.

Direct buyers who purchase all 8 books of the Ronald Kelly Essentials will be eligible to receive a free hardcover chapbook featuring 4 new stories from Scott Nicholson, Bryan Smith, James Newman, and Nate Southard.