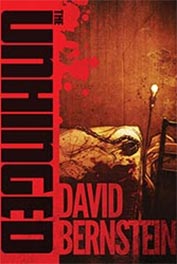 The Unhinged
by David Bernstein

After spending six years behind bars for his part in an armed robbery, Aaron Dupree is released on parole. He’s a changed man, has a job, and a new love interest. Things are going well for him until he is pulled over for speeding. The officer offers Aaron a choice. He can either go back to prison for violating parole, or agree to do things for the cop. Without hesitation, Aaron jumps at the chance to avoid being locked up again.

Aaron soon finds himself under the cop’s thumb and caught in a web of madness. As the level of horror rises, he doesn’t think things can get any worse until he meets the man with the scar, a vile and malevolent individual who only lives to deal pain and punishment.