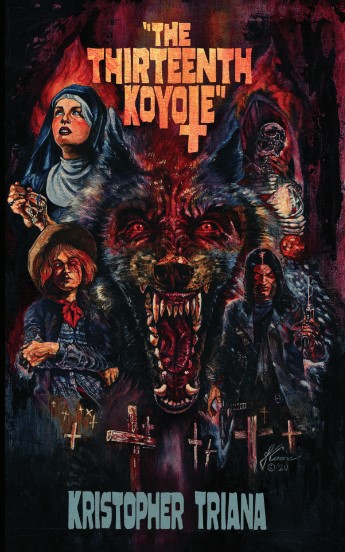 The Thirteenth Koyote
by Kristopher Triana

An evil has returned to the town of Hope’s Hill. When a grave robber unearths the corpse of Jasper Thurston, a piece of the body is stolen, one that will call the Koyotes from across the plains. They are a vicious company of outlaws, part madmen and part wolves. Their leader is Glenn the Dreadful, and he’s out to gather the power of the Menhir, a particle from an ancient evil. The fate of Hope’s Hill—and perhaps the world—rests in the hands of unlikely heroes. A rugged U.S. Marshall, a teenage girl out for revenge, an emancipated slave, a nun with a dark secret, and a mysterious half-breed with the number thirteen tattooed on his neck. The Thirteenth Koyote is a werewolf western from Splatterpunk-Award-winner Kristopher Triana, author of Gone to See the River Man and Full Brutal. Filled with gunfights as well as ghouls, it is a horror epic as big as the open range.