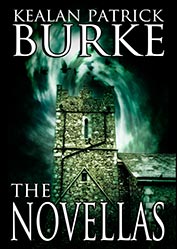 The Novellas
by Kealan Patrick Burke

Featured in this book are:

The perfect place to hide…

Hocking Hills, Ohio is an oasis for campers, hikers, nature enthusiasts, and for those who just want to get away and lose themselves in the wild.

And as long as you follow your guide’s advice and stay within the permitted areas, you can expect to survive the night.

Because deep within the dark woods, something insidious awaits, something few have ever seen, something ancient, unknowable, and insatiable.

If you go down to these woods today, you won’t live to see the sunrise…

For years the Wickerwood Inn has stood abandoned, home to nothing but dust and the trapped echo of past celebrations…and tragedy.

For a down on his luck ex-gambler, the inn’s reputation is a thing of myth, and certainly not reason enough to turn down the first paying job to come his way in months. The inn will soon be renovated in preparation for a new lease on life. So tonight, from midnight till six, Peter Haskins will watch over the machinery.

And he will soon discover that there is something else in the hotel with him, something that needs no new lease on life, for it has never died.

Wade Crawford is not a good guy. He’s a bank robber and a ruthless killer, and now three people are dead and Wade is on the run. With the cops hot on his heels, he breaks into a seemingly ordinary house in a seemingly ordinary neighborhood to hide and wait on word from his partner.

But this neighborhood is far from ordinary. Indeed it has a very specific purpose, and soon Wade will discover that life in prison would be preferable to the hellish torment Seldom Seen has in store for him.

Meet Jason Tennant, a writer of violent horror novels whose career is mired firmly in a maddening swamp of frustration somewhere north of nowhere and south of success. He is a midlister, those thankless souls who labor in the shadows of sometimes better, sometimes luckier writers, and it’s starting to take its toll.

Welcome to Baltimore, Maryland, and the Aurora Science Fiction & Horror Convention, where these two men, midlister and bestseller, will meet for the first time, and the midlister motto “Better Read Than Dead” will be put to the ultimate test.