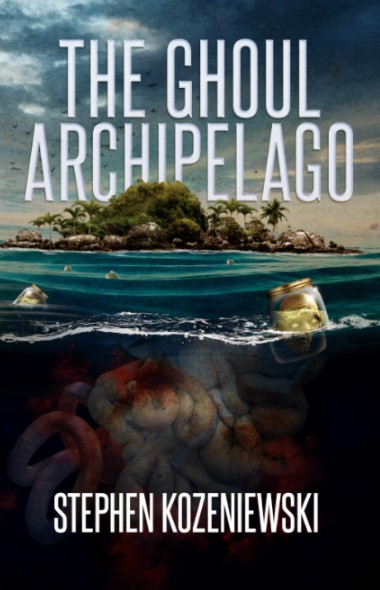 The Ghoul Archipelago
by Stephen Kozeniewski

After ravenous corpses topple society and consume most of the world’s population, freighter captain Henk Martigan is shocked to receive a distress call. Eighty survivors beg him to whisk them away to the relative safety of the South Pacific. Martigan wants to help, but to rescue anyone he must first pass through the nightmare backwater of the Curien island chain. A power struggle is brewing in the Curiens. On one side, the billionaire inventor of the mind-control collar seeks to squeeze all the profit he can out of the apocalypse. Opposing him is the charismatic leader of a ghoul-worshipping cargo cult. When a lunatic warlord berths an aircraft carrier off the coast and stakes his own claim on the islands, the stage is set for a bloody showdown. To save the remnants of humanity (and himself), Captain Martigan must defeat all three of his ruthless new foes and brave the gruesome horrors of…The Ghoul Archipelago.