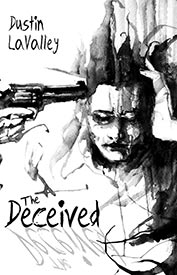 The Deceived
by Dustin LaValley

After a bloody armed robbery of a gas station a young couple resume their cross-country crime spree guided by a newspaper article, a phonebook and a town map to their next job. An easy in-and-out.

Miles Matthews is a soft-spoken man who has been pressed to the edge of humanity’s moral and psychological fibers and has no plans on returning — until an abrupt plea for help arises in the middle of the night at his own front door.

Neither host nor guests could know what horrors lie on the opposite side of the door and neither could imagine the deadly game of cat-and-mouse that is to ensue upon its opening … and sealing.