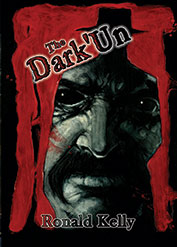 The Dark’Un
by Ronald Kelly

That was how the mountain folk described the legend known as the Dark’Un. A shadowy creature that dwelled on the lofty Tennessee peak known as Pale Dove Mountain… a changeling as old as time itself, with the power to turn into a man’s worse nightmare. But then it was only a legend, wasn’t it? A boogeyman to keep young children in line or conjure goosebumps while sitting around a midnight campfire, spinning ghost stories?

Or was it actually for real?

Jenny Brice returned to Tucker’s Mill to find her father dead and the peace of her childhood home shattered by the pursuit of power and greed. The rural tranquility of Pale Dove Mountain was gone and, in its place, rang chaos and menace. The passive albino creatures that the Brice family had nurtured and protected for centuries were in danger of extinction, if Jackson Dellhart, the CEO of the Eco-Plenty Corporation, has his way. Money could buy anything and he had plenty to assure that the mountain was his to ravage and do with as he pleased.

But he had not figured a single factor into his equation of inevitable conquest. And that was the hellish, unstoppable fury of the Dark’Un…