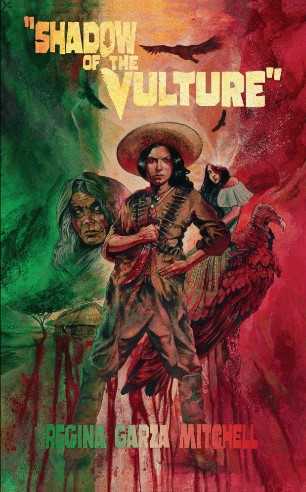 Shadow of the Vulture
by Regina Garza Mitchell

As Americans move west towards their manifest destiny, they disrupt lives, steal, and murder. What happens when that brutality clashes with witchcraft and the supernatural in the small town of Soledad?A powerful witch goes to the extreme to protect the land. A young woman weaves protective spells into clothing, but what she wants to do more than anything, is soar with the vultures. An ex-soldier accompanied by her dead friend looks for another battle to fight and will do anything to make the American invaders pay in the bloodiest ways possible. When they come together, Texas will never be the same. Power clashes between witches, warriors, brutes and innocents, and over it all hovers the shadow of the vulture.