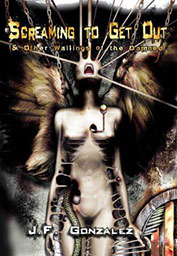 Screaming to Get Out & Other Wailings of the Damned
by J. F. Gonzalez

A man wanted for the murder of his young son takes a woman hostage in her home and realizes she’s hiding her own dark secret. In a glimpse of a possible future, a young girl must survive by her instincts if she wants to eat and keep a roof over her head. A college student realizes the invisible thing creating havoc throughout the world is a direct result of not sticking up for the most picked-on kid in school who also happened to be a scientific genius. A man begins to realize his new job isn’t all that it’s cracked up to be when his boss begins demanding things most employers wouldn’t demand from their employees. And a young couple’s obsession with a critically-acclaimed artist proves deadly as the tattoos they’ve acquired from the artist himself take on a life of their own.

Screaming to Get Out & Other Wailings of the Damned marks J. F. Gonzalez’s fourth official  full-length short story collection and spans two decades of work. This special limited edition includes over 30,000 words of material exclusive to this publication including stories previously available in hard-to-find and long out-of-print volumes, and stories only available electronically. With an introduction, and lengthy in-depth story notes by the author, the stories in this volume range from quiet tales of unease to cosmic nightmares, to bizarre humor, to tales of psychological suspense and tales of SF dystopia. The special Thunderstorm Books edition of Screaming to Get Out & Other Wailings of the Damned is J. F. Gonzalez’s most varied and largest collection of short fiction to date.