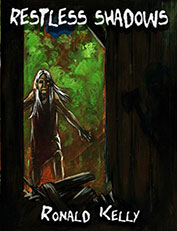 That was the first thought that crossed Cindy Biggs’ mind when she heard of the brutal triple-murder in her hometown of Coleman. Yes, the awful crime was nearly identical to the one performed during her hard-scrabble childhood at the time of the Great Depression. And, strangely enough, it had taken place in the same place… the ruins of the old tobacco barn near the edge of Green Creek.

But this was 2014, not 1936. Cindy was no longer an innocent nine-year-old child, but an elderly woman who used her gift of second sight to assist the police every now and then. And the man who been mostly responsible for that mass killing in ’36, Bully Hanson, had been dead and in the grave for seventy-seven long years.

Still she could not shake the overpowering feeling that he was involved in the massacre of three people and that the thirteen year old boy suspected of committing the murders was completely innocent. The only way she could be certain that her suspicions were more due to intuition than senility was to return to Bedloe County . And, with the help of her granddaughter Beth, revisit the most devastating period of her life… and hope that, somehow, someway, the most evil man she had ever known had not slipped the bonds of death and come back to wreak havoc once again…