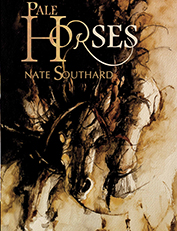 Most days, Sheriff Hal Kendrick can remember his wife’s name, but what frightens him are the days he can’t. When a local woman is found dead, naked and dumped on the banks of the Ohio River, Sheriff Kendrick is determined to solve the crime before Alzheimer’s disease destroys his ability to reason. No matter the cost, he will leave his county better than he found it, but murder is only the beginning, a spark that ignites a firestorm of violence, betrayal, and deceit.

Most mornings, former marine Korey Hunt can remember the previous night. Other times, he only remembers darkness. When a body is found on his family’s property, Korey wants to believe he’s incapable of murder. Deep down, however, killing is all he knows.

Death rides a Pale Horse, and no one in its path escapes unscathed.