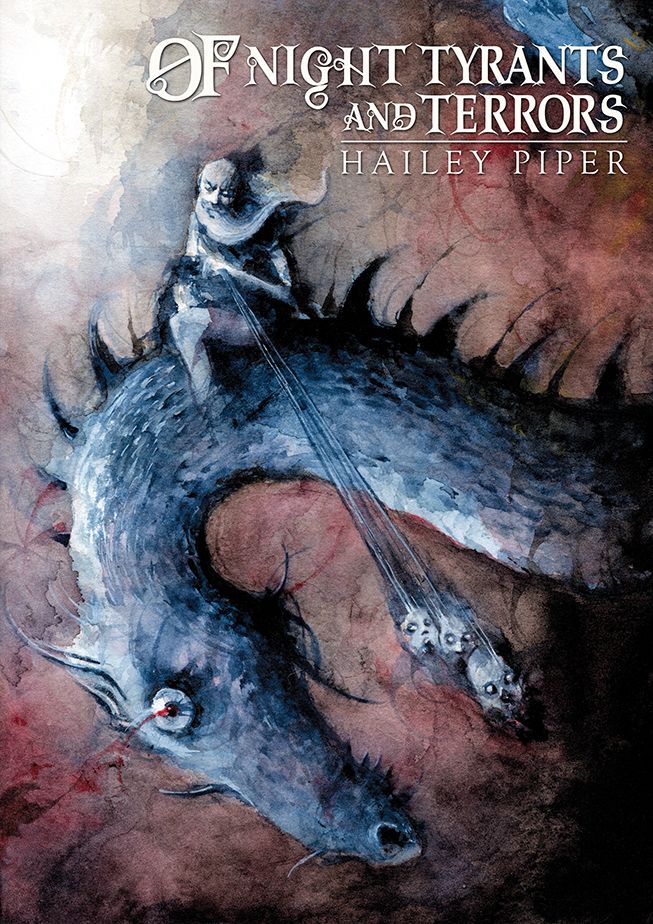 Of Night Tyrants and Terrors
by Hailey Piper

OF NIGHT TYRANTS AND TERRORS
Oppressors, kings, tyrants of all kinds.  They are masters of their domains, ruling life and death, thought and will. Across four collected works of long fiction, Hailey Piper introduces readers to these royal demons, crowned not by infernal hells, but by humanity, and its pride, rage, greed, and grief. In these sinister kingdoms, teenage girls fight for their lives, a mother at wit’s end reaches for her last resort, lovers meet across damned seas, or separate under fates set in motion millions of years ago by forces only glimpsed in nightmares. There are no good kings, only the survivors and the dead.

THE POSSESSION OF NATALIE GLASGOW – A desperate mother seeks the help of a paranormal expert when her eleven-year-old daughter’s nocturnal behavior turns wild and dangerous. Mystery and horror merge in a tale of exorcism, family, and revelation.

BENNY ROSE, THE CANNIBAL KING – A Halloween prank centered on a small town’s legendary cannibal goes wrong when a group of teenage girls discover Benny Rose is all too real. A gory coming-of-age slasher lurking in the stormy woods of 1987 Vermont.

AN INVITATION TO DARKNESS – A ship captain falls for the heiress to an isolated seaside manor, but a sinister secret lurks below the waves and stalks the halls by moonlight. Dreamlike mystique haunts this Gothic horror.

THE WORM AND HIS KINGS – In 1990 Manhattan, a homeless woman’s search for her missing girlfriend turns to rescue when she learns the abductor is a subterranean creature linked to a secret cult. What lies beneath is a darkness that stretches from the dawn of time and across the stars. An engrossing cosmic horror story of love, identity, and universe-bending terror.