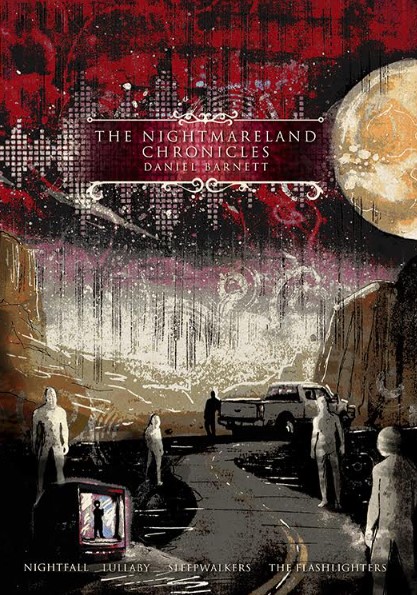 “Tomorrow died on the last morning of May. There were those who saw it happen, who watched the shadow fall, who felt the chop of the guillotine as the world lost its head. Everyone else witnessed only the aftermath, for the event itself lasted no longer than a moment. They stepped outside from windowless rooms, they climbed up from crowded subways, they pulled back the blinds to let in the sun, and found the nightmare waiting for them.”

But the dark is only the beginning.

Something else. These are the words John Hawthorne whispers on a forgotten back road when a passing cloud reveals the moon. Something else. For the moon cannot shine without the sun, and so its presence above can only mean there are other forces at play behind the night. Terrible, unspeakable forces, whose designs for humanity will soon become known . . . LULLABY is the second volume of the NIGHTMARELAND CHRONICLES, an ongoing serialized adventure horror epic following one man’s journey to reach his estranged daughter in a world claimed by eternal night.

First came the night. Then came the lullaby. Now Mariah Nowak must enlist the aid of young Marcos Walker, caretaker to a small town in southwestern Nevada, if John is to survive the fevered ruin of his dreams. But they aren’t alone in this dark new world. And the sleeping don’t rest easily.

John Hawthorne is awake at last. But so are other things . . . horrible, unthinkable things born from bad dreams and left to roost across the darkened Utah countryside. Nor is that all. Somewhere on a lonely highway to the north there waits a mysterious, light-worshiping band of drifters led by the magnanimous Father Ammon, whose one blind eye might hold a secret path to salvation . . . at least for some. America is dead. Welcome to its nightmare.