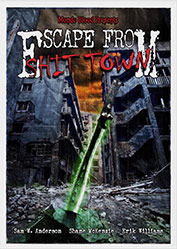 It’s just an ordinary Halloween night. Costumes. Booze. Bombs. Crazy fuckers paid to kill you one by one-

Oh, it’s an ordinary Halloween night for the Fitzpatrick family. Well, not for them, for Grandpa Fitzpatrick, who’s decided each and every one of his grandkids must prove they deserve his name, deserve to be the one and only to receive the family fortune. All they have to do is survive the night. Make it out of Gramp’s abandoned and cordoned off ghetto. A ghetto he’s populated with all manner of hunters looking for a little taste of dough and blood.

It’s grandkids versus hunters in a one night only fight to the death in Shit Town! Been hungering for some games? Been battling for a royale? Shit son, you ain’t seen nothing yet.