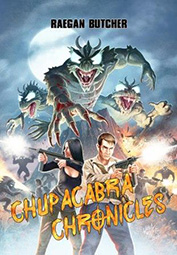 The Chupacabra Chronicles: three novels of terror and suspense in one great package!

Attack of the Chupacabras centers on two American gunrunners, Joe and Keith Gifford,
who are besieged by the legendary creatures when their car full of illegal weapons
breaks down in a remote Mexican town. Retreating to the local church with a handful
of other survivors, including a comely waitress, an Irish “whiskey priest,” and two
hard boiled Mexican policemen, they must use the arsenal hidden away in their
automobile to survive through the night.

Fury of the Chupacabras continues the story as Joe Gifford and his team, now working
as professional chupacabra exterminators, are called to a small town in the Florida
panhandle to help eradicate the beasts. Upon arrival, they find that the vainglorious
rock star Jet Ryder is also in town to hunt the creatures for his reality TV show
“Armchair Warriors.” Forming an uneasy alliance with the show biz people, Joe and his
gang set out to destroy the nest of chupacabras hiding in an abandoned school on the
edge of town. Things quickly get out of hand and the entire town is besieged by the
angry monsters.Who will survive the Fury of the Chupacabras?

Rise of the Chupacabras takes the series in a completely new direction as Joe Gifford
and his gang of professional chupacabra hunters are forced to unravel the mystery of
the creatures’ origins. Do chupacabras come from outer space? or were they genetically
created in a laboratory to be the ultimate weapon? Find out the answer in this thrilling
installment of the Chupacabra Chronicles. ***This hardcover features an alternate ending
to Rise of the Chupacabras that will be VERY different from the trade paperback version,
so get your hardcover now!