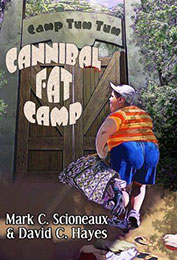 “Reading Cannibal Fat  Camp is like shoving thirty two White Castles in your face. You know you should stop because it may kill you, but it is so warm, gooey and  delicious there just isn’t enough willpower.” Jeff Dolniak – Cinema Head Cheese.com

“Miles Landish can’t help himself. He eats and eats and eats and eats  just to fill an empty, gaping, hole in his self esteem. Nothing ever seems to fill that hole, even the five star meals Miles’ wealthy parents make possible. So, as a last resort, Miles attends Camp Tum Tum, a weight control camp for spoiled teens. What happens there is only hinted at in high social circles, but the truth must be told. Facing  starvation, the campers at Tum Tum make a decision that very few human beings have made. That decision turns Camp Tum Tum into…  Cannibal Fat Camp!”