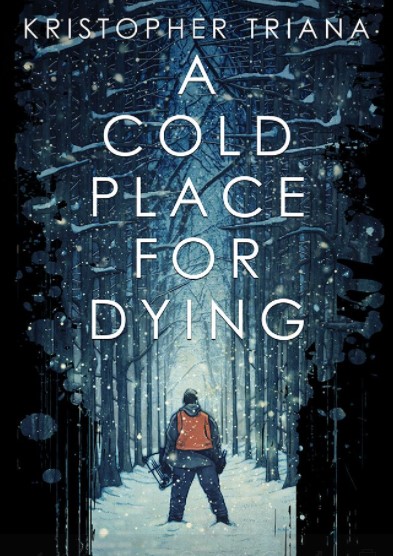 A Cold Place for Dying
by Kristopher Triana

It’s Christmas Eve. Having lost his wife, Joe Whitaker is spending the day hunting deer with bow and arrow in the mountains of New England. He finds a sense of peace getting back to nature, and even leaves his phone in his truck, wanting to free himself from the everyday world for a few hours. But no sooner does he enter the woods then his peace is interrupted by Nicole, a frantic woman running barefoot through the snow. She claims she was kidnapped and has managed to escape, but the man who imprisoned her is now on her tail and won’t stop until she’s his hostage again.

Joe wants to help Nicole, but when he comes across Dan, the man pursuing her, he’s told Nicole has a serious mental illness and is delusional. Dan claims he isn’t her kidnapper—he’s her husband. As a snowstorm bares down on the mountain, Joe soon finds himself in a deadly triangle with a mysterious man and a panicked woman, not knowing who to trust. If he makes the wrong choice, it might just cost him his life.

A Cold Place for Dying is a dark thriller by Kristopher Triana, the award-winning author of Gone to See the River Man and Full Brutal. It is a taut and terrifying story that tests the morality of its reader, leaving you breathless as you try to stay warm.