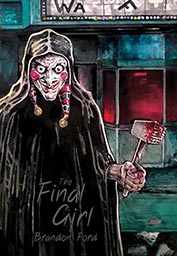 The Final Girl
by Brandon Ford

The Colonial Theater, a single-screen movie house on the edge of town, is holding a special midnight screening of a brand new splatter flick.  But before the opening titles make it to the screen, the popcorn-laden aisles run red with blood as a masked killer begins slaughtering the moviegoers with the aid of a spiked meat tenderizer.

Among those filling the torn seats:  a movie blogger in search of fodder to appease his limited readers, a victim of a recent betrayal who’ll do just about anything for an escape from a home she no longer feels welcome, a fugitive on the lam looking for sanctuary from the city streets, and a pair of post-adolescent twins who’ve managed to creep into the theater unseen.

After a full ninety minutes of bloodshed both on and off the silver screen, only four patrons remain.  Four patrons who discover that the doors have been locked and the only way out is inside a body bag.

An edge-of-your-seat nail-biter of a thriller, The Final Girl will fill your restless night with a bloody horror show and keep you guessing until the very last page.