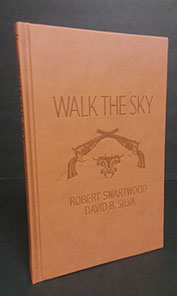 Walk the Sky
by Robert Swartwood & David B. Silva

Things are bad for Clay Miller and George Hitchens.

For starters, they’re on the run from a posse out for blood. Then, as they ride through the Utah desert, the two come across the crumpled body of a young boy on the brink of death. The boy can’t speak, but it’s clear he’s frightened of something in the area. When asked what’s got him so scared, the terrified boy writes three letters in the dirt .

By nightfall, Clay and George are tied up in jail. They can’t move. They can’t speak. They can do nothing but listen to the boy, outside, screaming for his life.

Yes, things are bad for Clay and George.

And they’re only going to get worse.

The Douglas Western deluxe edition is limited to 75 signed, individually numbered copies. The book is produced with upgraded boards (no dustjackets), and specialty endsheets; the signature page is full color; decorative stamping on the spine; and a ribbon page marker. Also included is a two additional bonus stories, 2 rewritten chapters, and a conversation between Robert and David highlighting the thought process of the project.