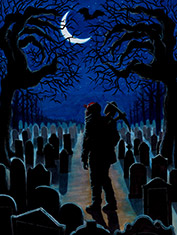 The Vampire of Plainfield
by Kristopher Rufty

Plainfield, Wisconsin. 1954. Robbing graves to appease his malevolent desires, Ed Gein inadvertently sets loose an ancient vampire on the unsuspecting town of Plainfield. As the number of missing persons rises, Ed realizes the vampire’s ultimate plan has been put into motion, and to prevent his dastardly practices from being exposed, he decides to slay the vampire himself. But he soon understands that he’s all the hope Plainfield has. As the few people closest to Ed are sucked into the vampire’s realm, he’ll be forced to reach deep inside himself to bring the incredible nightmare to an end.