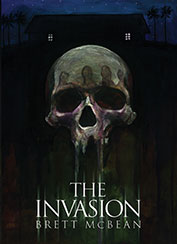 The Invasion
by Brett McBean

It was supposed to be a quiet end to a long day: five close-knit family and friends settling in for some much-needed sleep after coming together for an early Christmas party.

Instead, it’s the beginning of a shocking night of brutality when six intruders break into the sprawling residence of Debra Hillsboro, a middle-aged romance novelist with a fierce devotion to her loved ones and a strong kinship with her home of almost thirty years.

Armed with smartphones and a modern brand of madness, the intruders – an internet-age cult disconnected from humanity and addicted to causing fear and mayhem – have come to the secluded property for one purpose: to terrorize, and ultimately kill, everyone inside all while filming their heinous crimes.

Outnumbered and cut off from the outside world, the terrified occupants find themselves trapped in a fight for survival as a once place of safety is turned into a deadly maze of darkened rooms and forbidding hallways. On this sweltering summer night, they must somehow find a way to escape before the cult turns the beloved home into a house for the dead.