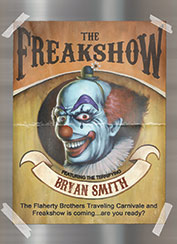 The Freakshow
by Bryan Smith

The Big Top show is coming to town. The Flaherty Brothers Traveling Carnivale & Freakshow promises dark wonders and startling sights guaranteed to repulse and delight. Or so goes the hype leading up to the event. But this is no ordinary sideshow. There are no garden variety oddities on display here. The usual array of deformed but otherwise ordinary people are nowhere to be found. The freaks here are not of this world. They are hideous mutants from another dimension, invaders come to slowly usurp and assimilate human society as they go from town to town masquerading as carnies in the employ of a downtrodden, old-time traveling carnival. P.T. Barnum is sometimes said to have coined the phrase “A sucker is born every minute.” Maybe so. And maybe that is especially the case in little Pleasant Hills, TN, where the locals have turned out en masse for the Freakshow’s opening performance. None of them suspect this will also be the Freakshow’s only performance in Pleasant Hills. Unfortunately for them, by the time the quaint sideshow veneer is peeled back to reveal the ugly truth within, there will be no chance for escape. The freaks have come out to play. Blood flows in rivers and atrocities and perversions abound as the night of terror unfolds.

Heather Campbell rides unsuspecting into this setting of terror and madness. She has come from a neighboring town to look after her invalid mother, who has not been answering her calls. She worries the woman has fallen and is unable to reach her phone. But the real culprit is much more sinister and soon Heather finds herself locked in a desperate struggle to survive. She is made to endure things that will test her in ways she could never have imagined. And if she somehow lives to see another day, will she do so with her sanity intact?