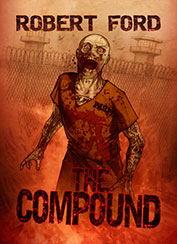 The Compound
by Robert Ford

Tartarus Federal Penitentiary is home to the worst violent criminals society has cultivated. It’s also a revolutionary modern day fortress, powered by solar panels and built to be a self-sustaining environment, complete with dairy barns and green houses. It’s the perfect place to be when an experimental virus hits the American public, making the dead walk the Earth once again.

Two brothers become entwined in a deadly struggle for power among the crowd of prisoners that have overtaken the guards.

Divorced parents fight for survival, trying to find each other and keep their daughter safe from the growing number of zombies.

An old biker is a man on a mission, trying to fulfill a promise to his dead wife, apocalypse be damned. Both his will and his supply of ammunition will be tested.

As the survivors on the outside fight for their lives, their lines of fate converge, leading them through the crowds of zombies and forcing them into the hell of the prison to save one of their own.

The Black Voltage edition is limited to 85 signed, individually numbered copies. The book is produced on an oversized 7×10” trim, with bonded leather boards, spine art, specialty endsheets; and the signature page is full color; Also included is a bonus story.