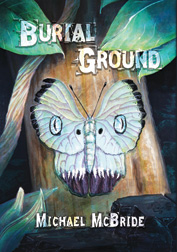 There are hundreds of thousands of acres of unexplored rainforest and mountainous terrain in the Peruvian Andes. Civilizations have thrived and perished in complete isolation from the rest of the world, and even now we are still discovering the hidden ruins of once great societies.

An exploration party led by Hunter Gearhardt is dispatched from Pomacochas in an effort to penetrate the mysterious cloud forest. After one final satellite communication, he and his entire team vanish without a trace.

When Gearhardt’s body eventually washes up on the bank of a seasonal river with only samples of vegetation, a handful of feathers, two black- and gray-streaked rocks, and a priceless golden headdress of indeterminate origin in his possession, his grieving father launches an expedition to determine how his son died. The party must use these clues to divine Hunter’s route into the wilderness, where they find a surviving offshoot of an ancient tribe, long thought to be extinct, and something far more sinister, something that’s been able to avoid discovery for eons for one simple reason…

No one leaves the rainforest alive.