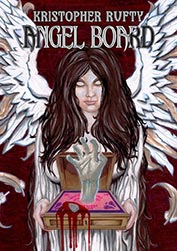 Angel Board
by Kristopher Rufty

David Barker wanted to die. A razorblade across his wrists should’ve done it. But somebody saved him, pulled him back before he was condemned to perpetual suffering in the afterlife. Now he’s obsessed with finding who—or what—she is. He’s haunted by the image of that beautiful, nebulous woman and won’t stop until he learns why she saved him. Was she an angel? He thinks so, and uses an angel board in hopes of contacting her. Unfortunately for him, he succeeds. This angel loves him, guards him, and protects him. She’s devoted to him and wants nothing more than to be flesh so she can be with him.

David’s guardian angel is obsessive, possessive…and homicidal. Nobody will interfere with her unyielding love that leaves a bloody trail of carnage as she eliminates, one by one, everyone in David’s life—anyone who might hurt him. Or love him.

Can she be stopped? David’s ex-fiancé, Samantha, and his sister, Amber, will team up with a burnout cop, his much younger partner, and a man of God to try. Soon, they’ll understand just how far this angel is willing to go to be with David, and how blessed they are if they survive.