THE 7TH THREE-BOOK SET IN THIS EXCITING SERIES FROM THUNDERSTORM BOOKS. 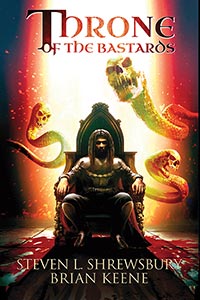 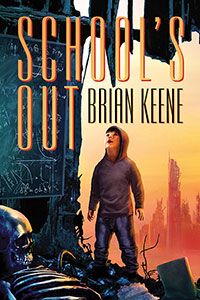 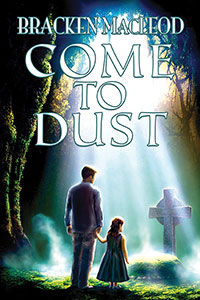 1. Throne of the Bastards by Steven L. Shrewsbury & Brian Keene

Rogan is back in this sequel to Brian Keene and Steven L. Shrewsbury’s award-winning KING OF THE BASTARDS, and this time, he’ll show no mercy. Learning that his family are in danger, Rogan returns to his former kingdom, now under siege from foreign invaders led by his bastard son. Now, the aging barbarian and his trusted companions, Javan and Akibeel, must forge an alliance new friends and old foes, mustering an army to retake the kingdom. Surrounded by savages, soldiers, demons, and dark magic, it will take all their cunning, skill, and courage to survive the war and determine once and for all who shall sit upon the THRONE OF THE BASTARDS.

2. School's Out by Brian Keene

Eight-year-old Alan doesn’t like going to school, but when a global pandemic leaves him orphaned, cold, starving, and lonely, he has no choice but to set out on a dangerous quest to return to his third-grade classroom. SCHOOL’S OUT, an all-new post-apocalyptic novella by Brian Keene, was suggested to him by his son, marking their first official collaboration, and is suitable for all ages.

3. Come to Dust by Bracken MacLeod

Ever since her mother abandoned her, five-year-old Sophie has had to depend on her uncle Mitch for everything. But he’s struggling. Restarting a life interrupted by time in prison is hard enough without having to balance work and single parenthood. Mitch is determined to make it work though, striving to keep their family together despite the obstacles in their way, because no matter how difficult things get, they are good for each other. And life for the two of them seems to be looking up. But when Sophie dies tragically, it all comes crashing down. Mitch descends into a crippling grief, coming to understand how little his freedom means without her to share it with. And though released from the sudden responsibility thrust upon him, all he wants is his niece back, safe and alive.

When he gets his wish and scores of children around the world begin to inexplicably rise from the dead—Sophie among them—everything becomes much harder.

Mitch rescues her from the morgue, determined to carve out a normal life for them no matter what, though it soon becomes clear that may not be possible. While the kids who’ve returned behave like living children, they still look very dead. And they can do something else that normal children cannot. Something terrifying. Beliefs differ whether the children’s return is a mercy or a sign of approaching judgment, and a congregation of religious fanatics determined to usher in the apocalypse has their own plan for salvation.

Now Mitch must find a way to save Sophie from an increasingly hostile world that wants to tear them apart and put her back in the ground for good.

This three book set is a pre-order item. The books will start shipping in January.

Your paypal receipt is your order confirmation.