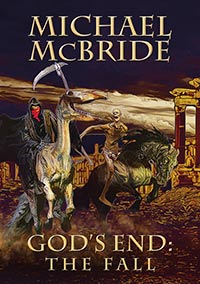 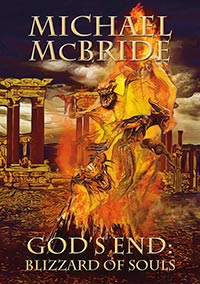 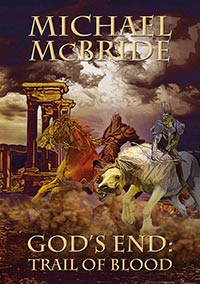 Civilization stands on the brink of annihilation.

With World War III imminent, an ancient prophecy becomes reality, heralding the arrival of the Four Horsemen of the Apocalypse and hell on earth. As the brutal forces of War, Pestilence, Famine and Death sweep around the globe, bolstering their terrifying ranks as they go, the survivors must brave the chaos to find each other and their ultimate destination, the mystical More Man Tears. Mankind’s only hope lies in the hands of a teen with precognitive abilities, an Army medic, a marine biologist, and a child believed to be the Second Coming.

Can they overcome seemingly insurmountable odds or is God’s End truly inevitable?

The final seal is broken; the end is at hand.

Hell has consumed the earth and civilization lies in smoldering ruin. The legions of Death have gathered in preparation of their final strike against the last bastion of humanity on the shores of the Great Salt Lake, where the ragtag group of survivors prepares to take its final stand. But living under the constant threat of extinction takes a heavy toll and dissention rises in the ranks. It’s forces suddenly divided, mankind must wage war against itself even as the attack of the Horsemen and their army of the apocalypse commences.

Can even the Blizzard of Souls save them from a battle they simply cannot win?

The time has come to stand or fall.

War and his army of terror have been vanquished, but the price of victory was staggeringly high. Only twelve humans remain to make the final trek across the scorched earth to where Death awaits them in his tower of darkness. Not all of them will complete the journey, for Famine, Pestilence, and the evil entity known as Leviathan stand in their way. Their only hope for victory hinges upon the strength of a prophet who lost his faith with his innocence and the willing sacrifice of one life in exchange for the rest.

Can they survive the final battle or will the Trail of Blood lead to their demise?


Your paypal receipt is your order confirmation.

If you wish to order by check or money order, the first step is to email me your order at thunderstormbooks@gmail.com with the subject line "GOD'S END CHECK ORDER".  I will reply and CONFIRM your order.  You will then have 7 days to get the check/money order made out to Thunderstorm Books in my hands at PO Box 1010 Cashion AZ 85329.