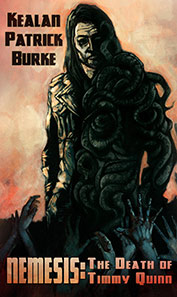 “We no longer need the sun to cast our shadows, for we have become them.”

For over twenty years Tim Quinn has lived in the shadow of death. Now, the Curtain has come down and the dead no longer need him to facilitate their vengeance. As the air turns amber, the shadows deepen, and murderous revenants begin to stalk the streets, Tim and the woman he loves must race to find Peregrine, the man they believe responsible for the sundering of the veil between the living and the dead.

While the sins of the past intertwine with the present and vicious entities old and new arise to claim dominion, Tim must learn the secrets of The Stage and uncover the genesis of those who created it before The Stage becomes all there is.

But just as there are enemies in Tim’s dark new world, so too are there allies: The Conduits, people possessed of similar gifts who share a common goal: to find and destroy Peregrine before Peregrine destroys them all.

In the final battle, Tim will fight not only for the woman he loves and the life she carries within her, but for the very fate of mankind. It is a battle that will transcend realms, cost lives, and at last bring Tim Quinn face to face with his nemesis.

Nemsisis the epic novel-length conclusion of the acclaimed Timmy Quinn series, which began in 2004 with the Bram Stoker Award-winning novella The Turtle Boy.